The quickest trip home from work, ever.

Day one of moto building

Midday my phone rang. It was the guy delivering this motorcycle to us from Minnesota. He was close by and wondered if I could meet him so he could drop off the 1975 Honda Cb550f I had purchased off eBay. Without hesitation I said I would be home in five minutes. It was the shortest trip home from work ever.

There are a lot of things about buying and building motorcycles that I have no idea about right at this moment. Some people select a motorcycle because of the horsepower or historical significance or the rarity. This purchase was pure “right price, right time” for me. I had never built a motorcycle. I had never even thrown a leg over one. In truth, I knew nothing about the 550f other than it was a bit over twice the displacement of my trusty 1981 Vespa P200e. The Vespa is a bike I had purchased with an astonishing 1600 original miles. One that I presently, at least at this moment, love dearly.

How would the bike look? I mean, I had seen it in the seller’s photos. It looked okay but not great. As I drove home, my mind was racing with hopes that the pixel reality I had seen was either exactly what was on that truck or was at least a fair representation of the actual item. I beat the driver home. Waiting, I flipped through the EBAY auction images thinking to myself equal parts “oh shit” and “hell yes, this is really happening.”

For the last few years, I had been searching for anything that would push the reality of my world into the background. I was in a job at the time that I was good at but had topped out in and was frankly bored with. My mother was in year five or six of what seemed like an eternity of Alzheimer’s related decline. And my good friend and fellow founding member of the “los vespaderos” scooter club had bought a Triumph Bonneville. That last bit was the spark that started this whole business of building. I felt confident that I would be able to build a bike that would be just as rideable, but with a smaller outlay of money than my friend had paid for his Bonneville. In five minutes I was about to see how high I was gonna have to reach to meet this goal.

Standing in the driveway, I heard what sounded like the hum of a diesel truck from about two blocks away. Five seconds later, the truck rolled around the corner turning left onto my street. Anticipation. I waved the driver down, we exchanged some info, and verified everyone was who they said they were. Then I proceeded to watch as he backed the truck into the driveway. What came off was what you see here. A bonafide, solidly intact but showing-its-age 1975 Honda 550f Supersport motorcycle. It was neither pretty nor ugly at this point. It was just full of potential. I had no idea as I stood there looking at it parked in my garage how much of an adventure I was about to take. But I had time, and now I had a purpose to bend that time to.

This author hasn't written their bio yet.
Szeigler has contributed 12 entries to our website, so far.View entries by Szeigler 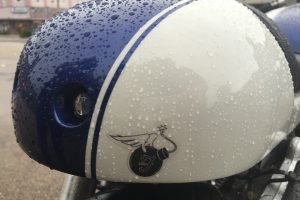 Bringing a knife to a gun fight. 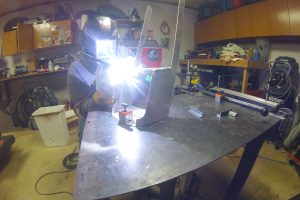 My dad, aluminum, and motorcycle building.

I am pretty sure that working with my hands[...] 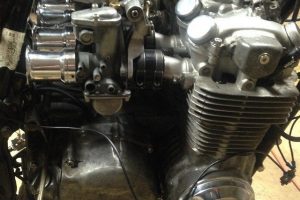 First run of the engine…

Engine math is easy. There are three variables in the equation[...]

Your email is safe with us.

This site uses Akismet to reduce spam. Learn how your comment data is processed.

We're currently offline. Send us an email and we'll get back to you, asap.